Iraklis Stamatis was born in Athens on 12th of February, 1974.

He has been dealing with the martial arts since 1996. He owns the 3rd Degree since December 2007.

Since 2002 he is dealing professionally as an instructor of Kung Fu, having created his own school in Ano Patisia, called “Evolution Tiger School”.

In 2003 he graduated from the faculty of trainers of the Hellenic Wushu Kung-Fu Federation and he is a qualified Third Grade Category trainer recognized from the General Secretary of Sports, while he possesses a diploma of Semi Contact referee of the third grade category since 2005. 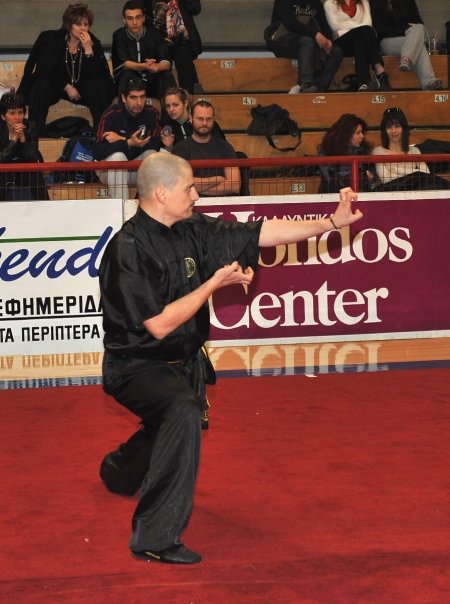 In 2004 he was selected at the national team of Semi Contact and he was rewarded from the Greek Fu Jow Pai Athletic Union, in 2006, for his European-level distinctions.

On April 2004, he was rewarded for his efforts in the development of the Fu Jow Pai system, by Sifu Nelson Giboyeaux, who henceforth is the regional Director of the Fu Jow Pai Union in Europe. He visited the USA, again, on October 2007 on the occasion of the celebrations for the 50th Fu Jow Pai anniversary , which were realized in New York. There he had the chance to meet in person with the masters of the system, namely Sigung Wai Hong Ng, Sibok Tak Wah Eng and many others.

In the summer of 2009, due to a serious knee injury, he decided to retire from competitive action, so he also retired from the Semi Contact national team. 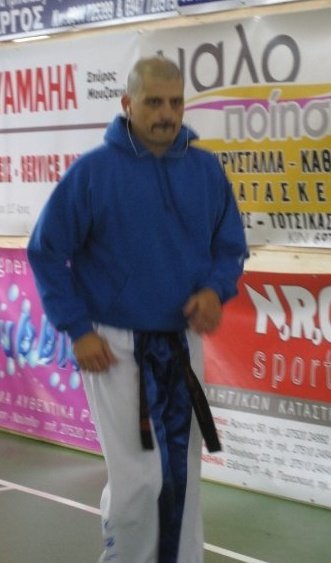 He began his training on October of 1996 at the association of N. Philadelphia with Nektarios Samiotis and continued practicing with Nikos Memmos (5th Degree). From October 2003, up until 2015, he has been a disciple of Sifu Nelson Giboyeaux. After Sifu Nelson Giboyeaux's decision to retire, he is a disciple of Sifu Tak Wah Eng. From 2002 until 2010 he had also been practicing in Wu Tai Chi with Dionysios Tsetselis, who is the person in charge for the system in Athens.

On March 2012 he received an honorary proposal by the Greek Federation of Wushu Kung Fu for the post of Chairman of the Technical Committee of Point Fighting (Semi Contact), which he accepted.

Since 1st of January 2012, he is, once again, elected as General Secretary of the Athletic Union of Fu Jow Pai. He is a member of the tripartite committee of the Fu Jow Pai Sports Sector, which was founded by 1/1/2013.

On January 2014, he received the rank of 4th degree as an honorary award, by the Hellenic Wushu Kung-Fu Federation, for his long contribution to the field of Wushu Kung-Fu.

On March 2014 he began attending the instructors seminar in Luohan Qi Gong, under the strict supervision and guidance of Sifu Gaspar Garcia, and after a year of intensive training he managed to complete the course, by succeeding on the examinations that qualified him as a certified Luohan Qi Gong instructor, on May 2015.

Heracles Stamating, carrying on the effort for seamless and sustained progress on the art of Fu Jow Pai Kung Fu, travelled and stayed for eight days at the city of New York, on April 14th 2015. Along with three other members of the Hellenic Fu Jow Pai Athletic Union's Sports Division, they performed training sessions under the supervision of Sifu Tak Wah Eng. After this trip, Sifu Tak Wah Eng has become the successor teacher of Heracles Stamatis, which makes a big success and a great honor, as well as a recognition of his consistent and seamless work for the past 11 years.

He also performed training sessions alongside Sifu Paul Koh, the senior student of Sifu Tak Wah Eng, exchanging valuable experiences and working for many hours on advanced forms of the system.

Finally, he arranged meetings and training sessions at historical locations for the art of Fu Jow Pai, such as the Colombus Park and the Headquarters of Fu Jow Pai Federation, under the supervision of Fu Jow Pai's gatekeeper, Si Gung Wai Hong Ng. These sessions have been focused on an advanced form - trademark of the system, one to be teached solely to the disciples of Si Gung Wai Hong Ng. Another great distinction that also bears a great responsibility towards the system he is serving for many years.

On January 2017 he became a member of the Greek Wushu Kung Fu Federation's Technical Committee for the southern styles.